Let’s Talk Abortion: An Open Letter to My First, My Only

Jocelyn Miller is a Montessori teacher in San Francisco who spends her weekdays supporting the growth, development, and independence of young children. She is a lover of writing, hiking, spending as much time outside as possible, and going to concerts. She wrote this piece to destigmatize abortion and to offer a story of strength and hope to women and men alike. 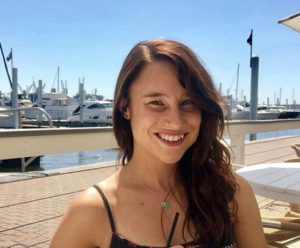 The afternoon I found out I was pregnant with you was just like any other day waiting for my period:  I was late. I had gone off my birth control a year prior and I didn’t get my period for six months; then once I did, they were not predictable: they always came, but my cycle wasn’t steady. Sometimes four days late, sometimes ten days… you get the idea.

I had been taking pregnancy tests every cycle for the past six months just to have peace of mind. And to be honest, your dad and I weren’t using protection. And each month, when it decided to, my period came. So at 26 years old, on April 10th, 2015, just as I had for months prior, I took a pregnancy test because I was eight days late. And just as I had for months prior, I did so with ease, telling myself, “What another waste of $15.” See, my boobs hurt and were swollen; I was tired; I was hungry. I was clearly going to get my period.

In the last twenty minutes of my lunch break, I walked to Walgreens and bought the test — thinking the employees must assume I’m really irresponsible (I guess I was?). I walked back to the preschool where I work with ten minutes to spare and decided, “I’ll just do it now. I’m not pregnant.” I went into the first floor bathroom and peed on that little white-tipped stick. As I was peeing, I thought, “Well, it’s definitely going to be negative since this isn’t my first pee of the day. Don’t worry though — you’re not pregnant!”

I sat on the toilet and watched as my destiny-deciding urine — diluted with water, coffee, and last night’s wine — crept across the screen. The first line showed up dark pink as it always did, and then, suddenly, a faint second pink line emerged. “Don’t panic,” I thought. Then, my eyes glued to the test as if it were revealing to me the secrets of the universe, I stared. I stared and I watched the second line darken and become more prominent. I stood up, pants around my ankles, and lost my footing, grasping onto the shelf that held toilet paper and Febreze. I paced the bathroom, test in hand, pants still around my ankles, repeating curses to myself like a meditative mantra.

Rapid thoughts flooded my brain. They were in no particular order: I broke up with your dad and essentially kicked him out of our apartment.  Your dad is an alcoholic. I was accepted into the Montessori teacher training program two days prior. I was accepted into a Master’s program the day before. I was promoted to junior teacher two weeks ago. My blood is one part plasma and two parts pinot noir. And with this tornado in my mind, I wrapped the pee stick (that represented my fate) in toilet paper (which, I couldn’t help thinking, was a pretty good metaphor for what was now my life).  I pulled up my pants, didn’t flush, and walked back into the classroom where twelve toddlers slept. I looked at them and I couldn’t believe that that potential was now inside me. And then I panicked.

I texted two of my closest friends.  They told me to think about what I wanted to do and that they’d support me regardless of my choice. Then I panicked more… I hadn’t even thought about how I had a choice to make, and how this didn’t only involve me, it involved your dad, too. That’s when I called him and told him he needed to come home, that I wasn’t mad at him anymore for all the horrible things he had recently done, and that we needed to talk. At first, he was kind of a jerk, but eventually conceded to drive two hours back to San Francisco even though I had just sent him away that morning.

On the way to the apartment he called and asked if I was hungry. “Starving,” I told him. “I want a burrito. And chips. Don’t forget the chips!” I waited for him on the couch in our front room, digging my thumb into the ridge of my index finger on both hands. I sit there like that until I hear the front door open and your dad walks in. We have only one flight of stairs, but I must have stood and then sat at least twenty times, unsure how to greet him. He walks into the front room while I am mid-stand, so that’s how I greet him. He tosses me the plastic bag with my burrito and chips (along with several containers of salsa that I didn’t ask for but he knows me well enough to bring them anyway), and asks, with little emotion, “What’s wrong?”  I sit down and ask him to sit too, and he does so, across the room. We sit in silence for a little while, then I ask him to sit next to me, and he does, all the while looking surprised.

I take his hand in mine and say, “Everything that’s happened the past few weeks doesn’t matter anymore. I’m not mad at you anymore. None of it matters.” Your dad’s hand squeezes mine, although I don’t think it’s purposeful, and he asks again, “What’s wrong?” I look him dead in the eyes, knowing I’m about to change his life forever. That’s the last burrito he’ll ever order without any major care in the world, I think to myself. And then I blurt out, without any grace, and much louder than I intend, “I’m pregnant.” His eyes get wide as frisbees and he says, “Wait. How do you know?” I pull out the test and show him the two pink lines. This apparently isn’t convincing enough, and he asks if I’ve taken any more… haven’t I considered it could be a false positive? I pull out a second test with two pink lines, that I took while on the phone with my sister — this time in the apartment, this time repeating different expletives. It all means the same thing.

Your dad looks at me and then the tests before putting them down, one in my lap and the other in his, but it falls in between us… how symbolic. (Sense my sarcasm, little one.) He puts his hand on my thigh and asks, “What do you want to do?” I ask him, “What do you want to do?” He replies, “I want to do whatever you decide. I support your decision and I’m here no matter what.” In the moment I feel I should be appreciative, but for the first time, I feel angry about ‘my body, my choice.’ Can’t, won’t someone just tell me what to do?! Out loud, we weigh the facts: I have my schooling, I’d lose my position of junior teacher if I don’t do the teacher training program, thus losing the ability to become a head teacher one day. That, and I literally broke up with him two days prior. Your dad talks about how he’s an alcoholic, out-of-work barista. Would you call that dad-approved? We wouldn’t.

I tell him I don’t want an abortion, but nothing about this makes sense. We talk about how we could make it work, but it just doesn’t make sense. And so, we eat our burritos, filling ourselves with reality and carne asada. We sleep in the same room that night, and the next day he drives me to work. When he parks in front of my school, in front of parents carrying in their babies and small children, I call Planned Parenthood and schedule an abortion for ten days from now.

Nine nights later, the night before the appointment, I go to sleep the same way I have every night since I found out about you: heartbroken and tearful. I cry. I don’t want to lose you. I don’t want to let you go. I’ve always wanted to be a mom, and already, I feel like I know you — and yet I can’t have you.

Again, I sleep in the same room as your dad that night, and when my alarm goes off, I get ready to take the bus to work. Your dad offers to drive me, but I want to listen to music on my headphones. ‘Gone’ by The Head and The Heart plays, and I publicly cry at the lyric Gone are the days when the wind would touch my face, gone are the days when you’re the wind. I work a half day, then your dad picks me up and we drive to Planned Parenthood.  There aren’t any protesters out that day and I’m grateful. After I check in, I have to take another urine test. Yes, I’m still pregnant. You’re still with me, and I’m grateful for that too.

I go into a patient room for questions and I’m told your dad can join me later for the mini-counseling session. I look back at him as the door closes behind me and I feel alone, until I remember you’re there with me. The first question the nurse asks is, “What was the first day of your last period?”, and I burst into tears. She assures me, “You don’t have to do this.” I tell her, “I do.” I compose myself.  I have an ultrasound which tells me you are a five-week-and-two-day-old single embryo. The technician asks me if I want pictures, and I say, “I do.” When she leaves to print them, I repeat the lyric from ‘Gone’ and I cry more while holding my stomach. She returns and hands me an envelope. I open it and see two pictures of you. For some reason, I’m not moved, but still, I don’t want to lose you.

I move into the mini-counseling session with your dad, and we are firm on our decision. We then move to a different room and wait for the doctor. The abortion will be via the pill (which I think is an awfully ironic name for it). The doctor walks in and is quite pregnant. My eyes fixate on her belly, and I sob. She tells me, “You don’t have to do this. You can always come back.” I tell her, “I can’t.” I’m honest enough with myself to know that if I leave, I will never will come back.  I ask for the pill and she hands me it along with a cup of water. I swallow hard several times until the pill burrows into the back of my throat like a rock. I cough and drink more water until it goes down, close to you. The doctor leaves and your dad and I hold each other and cry. We don’t say any words, but our embraces tell each other that we did the right thing.

Three years later, I look back on that day as the most difficult, important, unforgettable, and un-regrettable moment of my life. I wish I could have kept you, but I know our lives wouldn’t have been what you deserve. Each day, I will continually honor you and thank you for making the sacrifice so I could become a head teacher and get my Master’s degree; so your dad could take the steps he needed to stop drinking. You will always be part of my heart, and I know that if someday I see two pink lines again, it will be you coming back to me. And when that day comes, we’ll both be ready.