Kristen Portney is a Marriage and Family Therapist located in Berkeley, CA. She has focused her studies and work towards creating compassionate post-abortion care in a time when women’s reproductive health and services are still under attack. Kristen has had more than one abortion and has dedicated her path towards understanding and addressing the many nuances of contemporary abortion care. 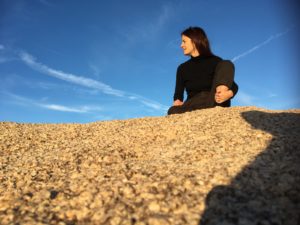 I held onto my abortion for two days. It sat inside a small ziplock bag on the cool plastic edge of my bathtub, undisturbed and distinguished. Two nights earlier I had labored my decision to not become a parent and held what felt like a small jellyfish in the palm of my hand.

On the third day, early in the morning, I started to feel restless, eager, and paranoid. “We need to do something today,” I said to my partner, my speech pressured and thick. I had proposed the idea of flushing what remained. Jeff pointed out the different ways that a quick flush didn’t fit the intention we had set for the abortion. We had promised each other we would be as present as possible for this abortion and for each other. When he suggested we bury it, I felt panicked. I couldn’t stand the thought of a dog digging a hole and exposing me so casually.

I kept thinking of the ocean where we’d walked for the hours and days before I began my herbal regimen to terminate our pregnancy; where we walked and talked and cried and made our decision; where we rested in the sand and Jeff took pictures of me pregnant with a smile. The ocean would be our solution.

The afternoon turned grey and damp, chilled by the onset of autumn in Australia. When we reached the shore it was empty, which brought a great relief. I started to say a few words as the ocean splashed our thighs, soaking the edges of our pants that we had pushed up into capris. I opened the small plastic bag, fearful of a smell, and began to wash it gently into the salt water. The air was silent and soft. We were blundering to capture our feelings and hopes for the future, when a dog began to bark and bark and bark and soon its voice drenched our backs. I turned to hiss the dog away, fearful it would snatch what was mine. The dog’s owner haphazardly called him back as the water pushed and pulled. Finally, the dog retreated and I quickly washed the inside of the bag, my uterus, my pregnancy, my abortion, and my choice.

Soon after, we left and walked home quietly, not mentioning the dog or the words that didn’t get spoken. I washed my hands for a long time as I held my gaze in the mirror, unwavering. I left the bathroom to decide what to eat for dinner.